Doug Foltz has spent much of his life exploring alone on or near the water. As the son of a hobbyist painter living in Miami, he was quick to pick up a paint brush at a young age, and soon a fascination with the sky and water, and the edges between, built the foundation for his work as a painter.

“It’s coastally inspired – places that are wet and salty attract me,” says Foltz, the 2020 South Walton Artist of the Year. “My work tends to be about nature, which is why I love South Walton so much and the variety of nature we have here.”

Stylistically, Foltz will tell you his work falls somewhere between abstract and representational, but “people tend to call it interpretive.” He’s fascinated by composition, and as a coastal landscape painter, he loves scenes.

“It’s as much about the way a place makes me feel as the way it looks,” he says. “I like places in nature that make me feel small, so I tend to do a lot of big skies.”

Foltz graduated from Auburn University with a degree in architecture and spent 30-years as a professional architect, graphic designer, visual communication strategist and a corporate communications consultant.

“I found out relatively early in that career (architecture) that the length of time from creative conception to completion, a run of three to five years, I didn’t have the patience for that, so I started exploring a lot of other areas of design,” he said.

While he still does some occasional consulting, Foltz spends his days as a full-time artist. He’s finding success practicing his craft but tends to view life as a continual evolution.

“I’m 63-years-old, but I’m not quite sure what I’m going to be when I grow up, so I hope that I don’t really have to grow up,” he says with a chuckle.

With work on display locally at Fusion Art Glass in Seaside, as well as at Huff Harrington Fine Art in Atlanta, Windsor Fine Art in New Orleans, the Gardner Colby Galleries in Naples, Florida and in private and corporate collections from Seattle to the Bahamas and northern Europe, it looks like he’ll be welcome to spend as much time in the art world as he would like.

Foltz creates large scale canvasses using oil paints and has a line of black and white photography under his Salt Crust Studios brand.

As for the oils, it’s the discipline that Foltz loves. Oils have their own “little quirks,” and there are times where in the middle of a painting where he’ll realize he has to “stop telling the paint what to do and let it start to bring its own thing to the effort.”

“There’s a richness of layering and color,” he says. “It requires me to work with it, rather than me telling it what to do, which I find important in a painting.” 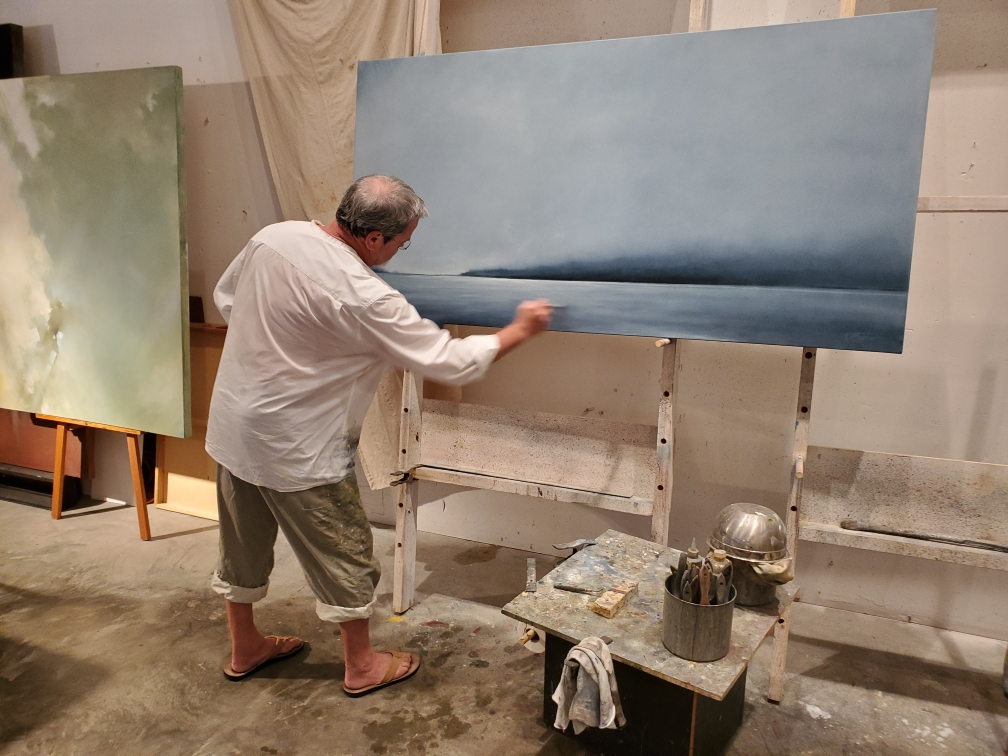 A lot of the pieces Foltz creates begin with poetry, a headline or phrase that he’s read. If you could see underneath his paintings, there are often quotes written on the canvas that served as the inspiration for the piece. There’s an interplay of words and painting that Foltz is incredibly fond of.

From concept to conclusion, a typical painting can take anywhere from four to five sittings (a 4-5 hour session) to a month, depending on factors such as weather and workload.

So how does Foltz know when he’s done with a painting? He jokingly says that he invites his wife down to the studio and she’ll tell him to put the brush down and step away.

Foltz says that he views art as an important influencer in the world.

“I don’t think of art as some type of luxury. I place it right up there with governance and law,” he says. “I think it’s foundational to our culture. Every culture from the beginning of time has had art, and I think we use it in a way to pose questions, sometimes provide answers. It makes us see the world in a slightly different way than we would otherwise.”

As for the Artist of the Year competition, Foltz will be the first to admit, with a laugh, that all artists have an ego, so he certainly wanted to win once he put his name into the running. Although he wouldn’t allow himself to get too “up,” he was definitely thrilled when he first learned he was selected as the Artist of the Year.

“It’s very rewarding,” he said. “But I see this as an opportunity for me to not just promote myself, but the arts community in Walton County and what I think those two mean to one another.”

Learn more about Foltz and his work by visiting his website at www.dougfoltz.com.